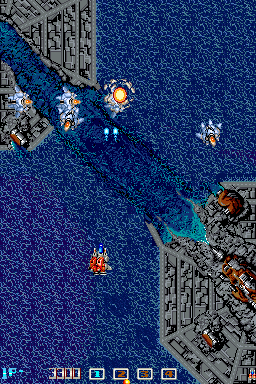 A mysterious alien life form is spreading across the galaxy, trying to conquer the world. It took control of the moon base and is threatening to descend on the Earth. The humans have sent the most advanced fighter jet to oppose the aliens: the OF-1. The OF-1 has the ability to change speed at any time and equip different weapons and pods. OF-1 is humanity's last hope!

ImageFight is a top-down vertically scrolling space shooter. On every level there will be enemy ships, turrets, robots, and other machines shooting projectiles or trying to ram you. But there are also power-ups scattered around in small green containers. You must destroy these containers before you can obtain the power-up. Those power-ups include pods that add extra attack power or speed, new kinds of weapons, the ability to fire in different directions, etc.